B. BIX ALIU, DEPUTY CHIEF OF MISSION OF THE U. S. EMBASSY: I am proud that as son of an immigrant I had become a diplomat

Deputy Chief of Mission at the U. S. Embassy in Montenegro B. Bix Aliu has lived in our country since August 2014. He comes from a family of immigrants and he is listed as one of the most successful Americans of Albanian origin. During his diplomatic career he has won numerous awards from the State Department.

,,A Diplomat who loves people”, as Aliu describes himself, greeted the crew of digital news agency Montenegro magazine in his home in Podgorica whose walls are decorated with works of Montenegrin painters. He tells us about growing up, a family in America, medicine studies, diplomacy, Montenegro, the impressions that he will take when he moves to Poland in August where a place of Consul General awaits for him in Krakow.

Bix Aliu speaks English, Albanian, Macedonian, Montenegrin, Polish, Serbian, but can also correspond in German, Turkish and Greek. His work took him to many parts of the world where he was able to get to know different cultures. He visited Montenegro for the first time when he received the placement here.

– We at State Department are very lucky to have the opportunity to travel, learn languages and get to know different cultures. I was in Tirana, Skopje, Dubai, Warsaw, now I am in Montenegro. I did not visit Montenegro while I was in Kosovo. I did not realize how beautiful Montenegro is and how Montenegrins are such beautiful people, kind and hospitable. To date I have not met anyone who is malicious, which is a rarity. My aim is to learn your language well, especially slang that Montenegrins use every day. For example, when someone tells me ,,hvala” (thank you), I say ,,vazda” (any time) – says Aliu with a smile.

He is very proud of the choice of his profession. He started studying medicine at the University of Chicago and graduated from the School of Medicine in Kosovo. He says he was a good doctor, but at the same time he knew medicine would not be his profession.

– It is very difficult to become a diplomat in America. Today I am proud of the fact that the son of an immigrant could become a diplomat. My father wanted to use the knowledge he had gained in a new country – America, to help develop democracy in Yugoslavia. He knew something had to change, that socialism is not something and it should be the choice of the people who at that time were living there. And he has tried so hard for my sisters and I to have all he did not have while growing up. I watched my father working hard so that he can create a different, better world he dreamed of, firstly for us, his children. I inherited this enthusiasm for work from him. I love people, I like to walk, see where people live, how they live, how they feed themselves. I am very open in terms of meeting and communication and I believe that this is very useful in diplomacy. It is important for me to talk to people, listen to how they think, what their aspirations are. In diplomacy it is easy to create a world in which you talk only to diplomats, politicians. I like to create the image of a country based on details I notice during contacts with ordinary people – says our interviewee.

He considers communication to be extremely important.

– It is important that we use many methods of communication and reach as many people we can. I am a Facebook generation, I use that social network, as well as Instagram, but I believe that social networks cannot replace live communication, face to face. One has to read from multiple sources and form an opinion afterwards. When I was young and I would see something on television – that was reality. It is different today. Today you have to be careful with accepting the information and trusting in it. When I was at university and did some analyses, it would require lots of reading and looking for facts, but today all the information can be searched through the internet browser, so people obtain them easily. But, it seems to me that they do not think critically much and do not develop critical thinking.

He arrived at the faculty in Kosovo through a student exchange program. Although he had planned to be there for a short period of time, during his studies he met his wife who is from Macedonia, so he stayed and graduated from the University there. While his children were small, the family accompanied him on his diplomatic travels. They have visited Montenegro several times, but this period of being apart from them for him, he says, is the hardest in his life.

– My wife works in America and she is very successful, so it was not easy for her to leave her job and come here. My son Blade was in the final year of high school when I got the job in Montenegro and we could not separate him from his friends and school, because it would not be fair if we did not allow him to graduate with his peers. He now studies Political science at Pennsylvania State University. It was his choice and I did not interfere with it. I commented, seeing as he played American football, that he can be a sports reporter, but he refused. He wants to be a lawyer. Daughter Tea is 12 years old. We made a compromise that they stay in America, but thanks to Skype, we talk every day. This, of course, is not perfect, but we try to communicate as much as we can and find ways to alleviate the separation – says Bix Aliu.

When asked what he insists upon in raising his children, he says:

– Respect, self-reliance, to know that multiculturalism is really very important in life and to learn to be approachable.

Our interviewee says he is liberal and does not like generalization no matter what part of life. Such is his view on marriage.

– Understanding, compromise, loyalty, equality, but most importantly, love is what makes marriage successful. I do not like generalization at all, so I do not like to generalize love either. I am a very liberal man. I believe that in every aspect of life we need to create our own attitude. We are all the same, the important thing is to understand a person – says Bix Aliu.

He says he likes to walk a lot when he has time and he loves to drive around Montenegro.

– Montenegro has a beautiful coast. I love Perast, the city that has preserved the spirit of the archaic, it is like a fairytale. I like Podgorica as well. When you are in Tivat, it is like you are in Dubai. All you wish to see exists in Montenegro. This is very important. I tasted national Montenegrin cuisine, but some dishes are very strong. For example, kacamak (polenta) is a strong dish, but Montenegrins are large and they can digest it. I tasted your wines as well, Vranac is great, but my favorite is the homemade wine from restaurant Troja in Tuzi.

When his diplomatic mission in Montenegro comes to an end, a job awaits him in Poland.

– We have plenty of work here and we work a lot, so I need a vacation. From here I go to America where I will be improving my Polish language. I will be Consul General in Krakow. It is a significant promotion for me. Krakow is a beautiful town and Poles are wonderful people – Bix Aliu reveals his plans and adds: Even when I’m gone, I will still be coming here.
V.T.
Photo: B. Šekularac 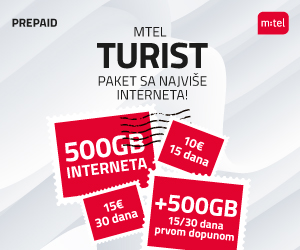